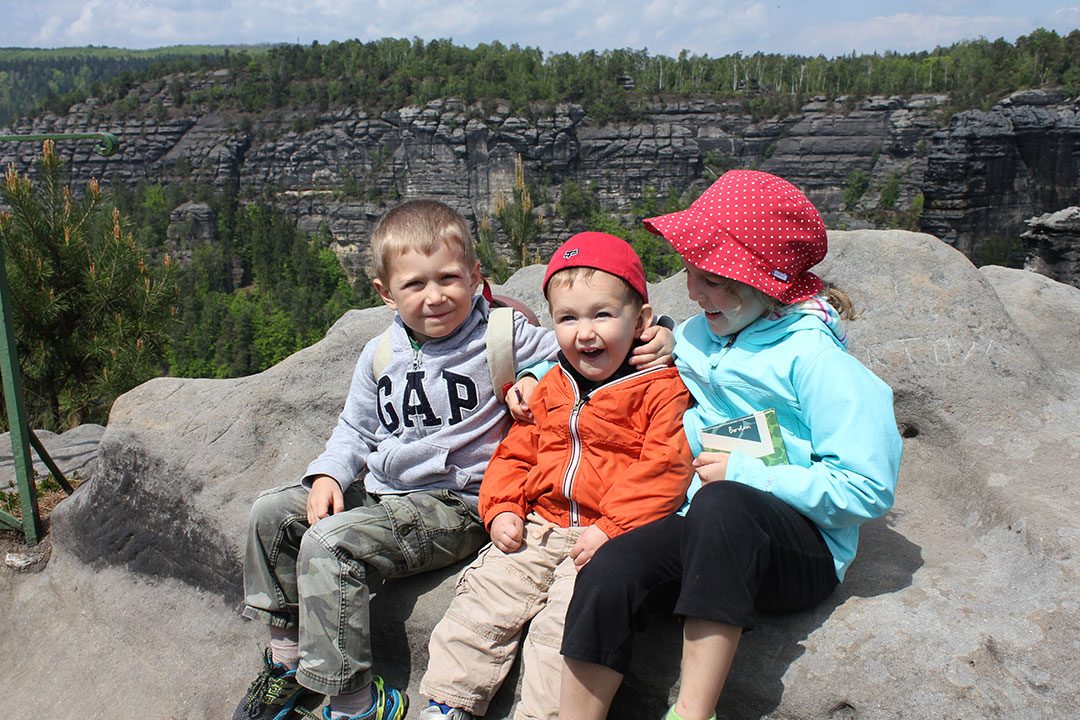 My neighbors joke that I am now Czech. That after living among them for more than ten years, I am one of them. “Už seš naše” (you are ours), they declare with what seems like satisfaction, usually when I catch a joke or make a retort to one of their witticisms. I argue back, citing the ways and reasons that I am still, and will forever be, American. Secretly, of course, I am proud that I can understand their jokes. At least a little. That sitting at the pub for hours listening to Czech banter doesn’t give me the headache that it did in earlier years.

Although I am reluctant to admit, it’s not as easy to keep my cultural identity as it was in the beginning. Czech humor hasn’t totally rubbed off on me, but I find myself more tolerant of the self-depreciating Czech sarcasm than I used to be. I wear slippers religiously, and I’ve even gotten into the habit of changing into “home clothes” when I come from teaching. I’m over being shy in the sauna, and I’ve gotten used to ordering a soup before my main course.

I’m happy with the life that I’ve created here, but sometimes I wonder if I’ve gone too far in adjusting to Czech life and standards. In transitioning within and conforming to the standards of mainstream Czech culture, have I lost a part of my cultural heritage, that one day I’ll look back and regret not having?

I ask myself the same question of my children. They are still small – four, seven and ten years old. But already their roots in the Czech culture are strong. They speak Czech at school, at their sports practices and in their after-school clubs. At home they play together, challenge one other, argue excessively and even dream in Czech. When I prompt them to speak to me in English, I get a blasted with a blend of Czechlish.

“Mommy, can you zavázat my boty?” (Can you tie my shoes?) from the youngest. A moment later, the middle one calls out, “Mommy, how do you rozdělit třicet-šest na šest? (divide 36 by 6). And the oldest declares, “Mom, can you remind me that I have a referát on Ellie Golding due next čtvrtek?” (oral report due next Thursday). I don’t blame them for speaking a mix of languages. I find myself doing the same thing in certain instances. Rarely do I call Samuel’s preschool anything but školka, Radek’s mother is always babička and the after-school child care is simply družina.

Are my children lazy? Is it my fault if they are unaware of some essential English vocabulary? Am I a bad mother for letting them get so thoroughly assimilated into Czech life that it has become a struggle to get one complete sentence uttered in English?

I remember years ago at a bilingual family gathering on Kampa striking up a conversation with a native New Yorker who’d been living in Prague 14 years at that time. She was waiting in line with her five-year-old son at the park’s public toilet. I was counting my crowns to make sure I had enough loose change to pay to go myself. Having recently discovered the convenience of being able to let my toddler-aged son pee discreetly in the bushes when we were caught in the city with no toilet nearby, I asked her why she didn’t let her son do the same. She told me that she’d also done it when he was smaller, but now that he was five, she wanted him to use the public restroom. She didn’t want her son growing up thinking that he could pee on the streets even though it was accepted practice among full-grown Czech males. She saw a chance to show her children the way it was done in her home country, and she was not about to let the opportunity slip past.

That day, I thought she was nuts to wait in line and pay 10 CZK when he could have scampered off and peed anywhere, no questions asked. Now, I am beginning to understand.

When you live in a place long enough and work hard enough at trying to blend in, after a while perhaps you begin to look back and wonder what it was you were originally trying to achieve.

After a recent discussion in her classroom about understanding children from different cultural backgrounds, 10-year-old Anna came home and told me that when her teacher mentioned other children with non-Czech lineage, she hadn’t included Anna. According to Anna, the teacher said it was because Anna’s diktát looked like the other Czech kids’ papers. Knowing that oral dictations in Czech language and grammar were one of Anna’s least favorite school activities, I wondered how Anna felt about her classification. Anna seemed a little puzzled, but okay with being told that she was just like the other Czech kids.

On the other hand, I began to wonder what would happen if Anna came into an American classroom. Would her Czechness stand out? Would she seem like an ordinary American fourth grader? Is there such a thing? How would Anna (or I) have felt if her teacher had told her that she didn’t have a “Czech” diktát? Would she question her place in this country she’s called home for nine years?

An English-speaking friend living in Vinohrady told me about a program in the Czech state elementary school that her bilingual son will start attending next year. In recent years, some Czech schools have created a special připravná třída (preparatory class) for rising first-graders who need more help adjusting to Czech school. In the traditional Czech system, these children would be left in preschool for an additional year. In the schools where it is implemented, the prep class will slowly prepare these children for school. Although the program is targeted for Czech children who may not be ready for the traditional first-grade due to speech or development delays, I think that this program and others like it could be invaluable for school children from non-Czech speaking families.

As a child, blending and fitting in at school is essential. Of course, children attending Czech state schools need to be familiar with the Czech culture and its language. However, any help from within the Czech school system toward understanding the different cultures that exist and thrive within the Czech Republic, should in turn help students from non-Czech or mixed backgrounds have a positive school experience.

On some level, I could have made a life in Prague without learning Czech. In general, Czechs tolerate the numerous non-Czechs who live in their country, and many will gladly practice their English speaking skills with you. However, unless you speak Czech, you are basically limited to what’s available to the English-speaking community. I didn’t want to be have a life that was limited by my language inadequacies. I wanted to feel like I belonged where I lived. I am not someone who thought she’d end up spending the rest of her life living in the Czech Republic. Maybe I won’t. Maybe my children won’t either. Their choices aren’t mine to make.

However, while I still have a chance to influence some of the little things in my children’s lives, I paid my first visit to the Korunni street branch of the Czech public library in Prague 3. Thanks to the Storybridge project, this branch has a sizable selection of English-language children’s books donated by the English-speaking community in Prague. I hadn’t been there before because it’s on the opposite side of town from me. Nonetheless, I checked out three read-aloud books by US authors and brought them home to read to Samuel and whoever else might want to listen. I may not be able to expose my children to other cultures only by reading to them; however, I can’t think of a better place to start.

Next on my agenda, I’m planning to address peeing in public with my boys. That is, just as soon as I get them to say a complete sentence in English. 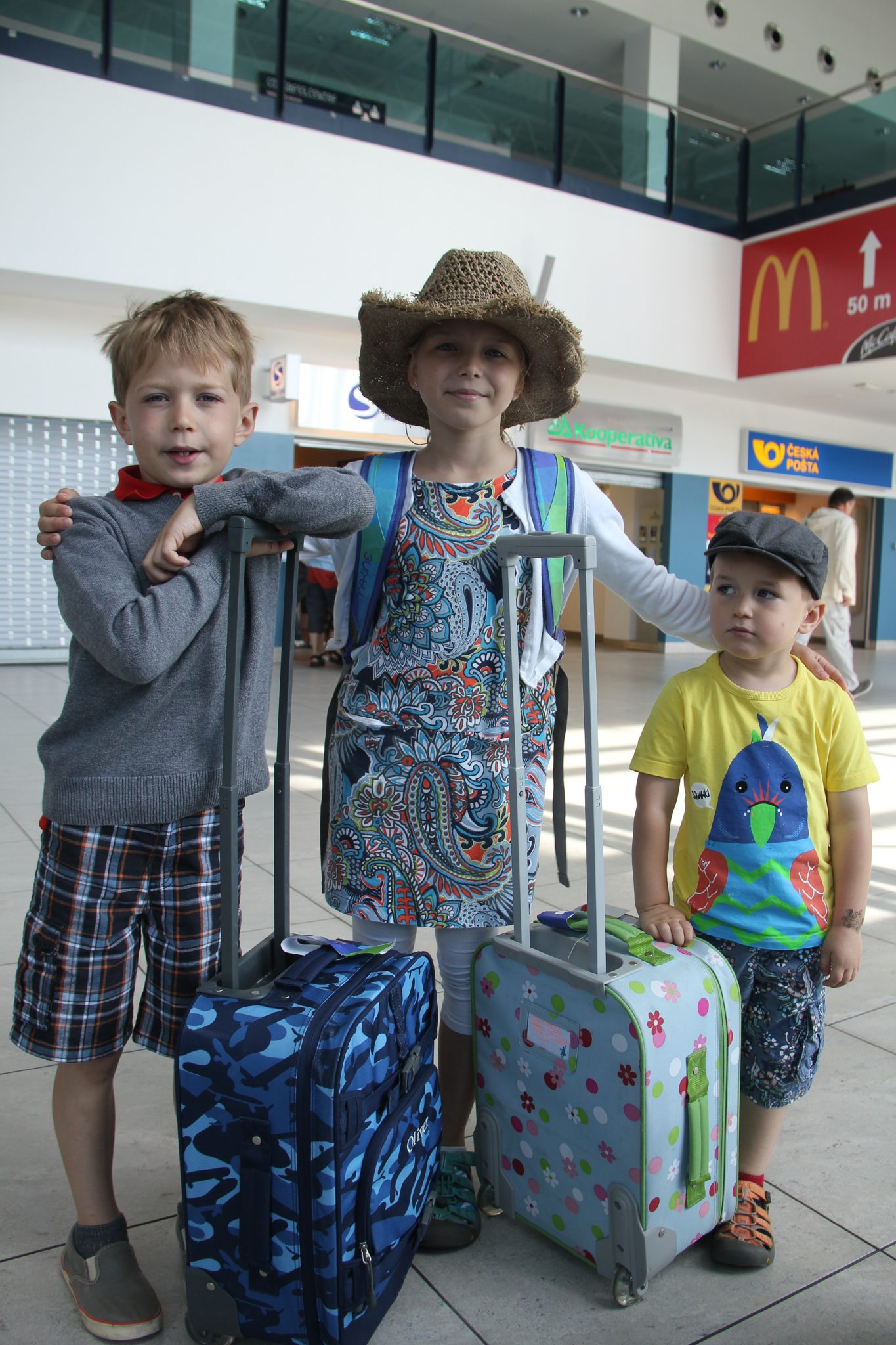 The things we carry 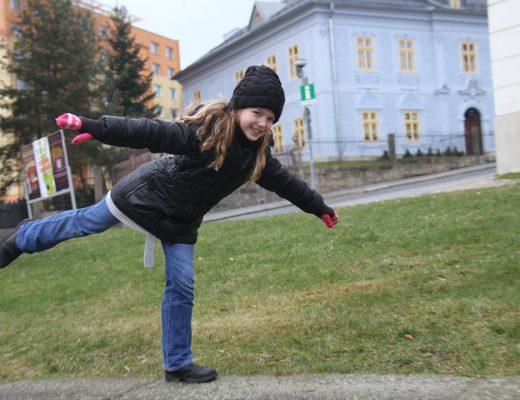 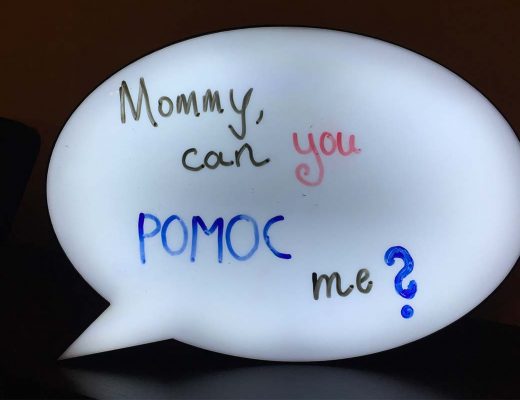 Taxi from Khaolak into the Khao Sok jungle. More f