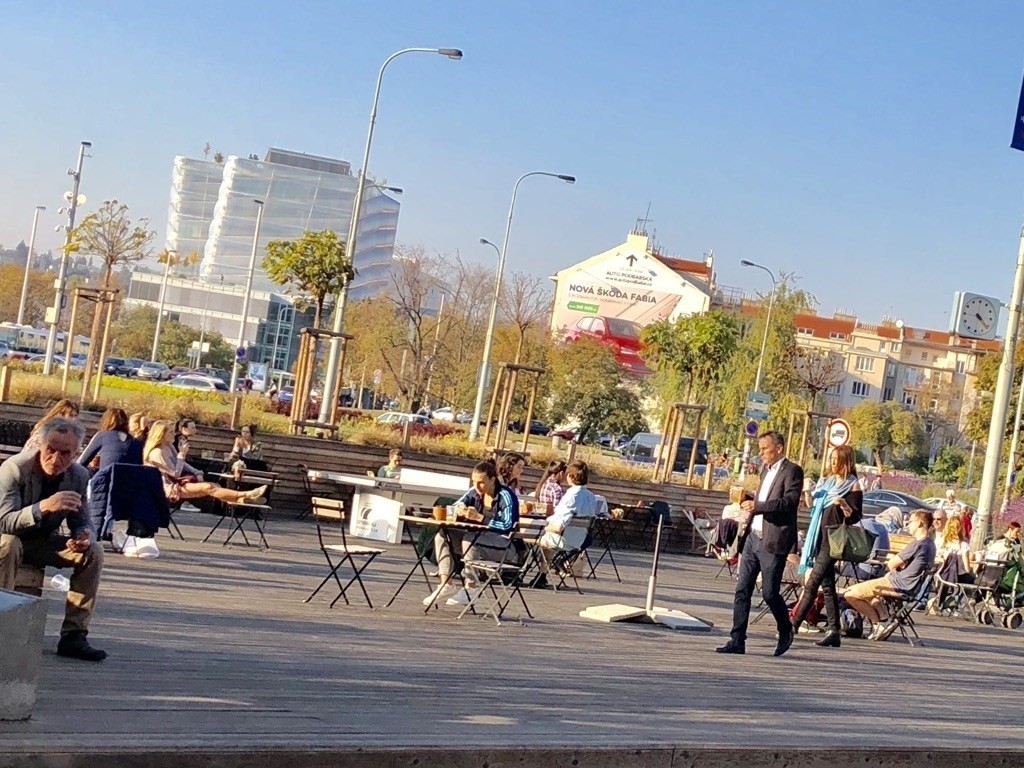 And adjusting to life in the Czech Republic

I should have picked something more Czech, I think as I pace outside the Starbucks café. School has been in session for a few days, and the open-air café space near the traffic circle in Prague 6 is bustling with the energy of students who’ve been released from their desks in time to enjoy the afternoon sunshine.

Two boys play ping pong while others lounge on wooden blocks. Someone bangs on the piano. The scene looks a lot more fun than where I am about to sit, among suit-wearing business people and mothers with strollers, but when I was suggesting a meeting place, Starbucks seemed easy. Now it is too late to change my mind.

I wonder if I’ll recognize Raya when she arrives. Her Gmail profile showed a tanned and smiling blond with long hair. I don’t know Raya personally; we’ve been put in touch through family back home. Raya is a student at a university near my hometown, and she, along with some forty other students, has come to Charles University’s Economic School for a semester.

When I check my phone, I see a text message, “I got here earlier than I thought. I’m walking around a little, I’m wearing a blue and pink romper.” When I read the word “romper,” I am reminded of my 13-year-old daughter, Anna. Like Raya, Anna wears rompers. I wish Anna could be here now. I have no idea what I’m going to say to Raya.

I look up to see a slim, blond in a romper smiling at me. My first thought – she looks so young, I could be her mother– is replaced by curiosity. Raya orders a chai latte, and we begin to chat.

I ask Raya about her courses and her travels. (In addition to classes, the program requires students to visit at least 7 countries beyond the Czech Republic during their semester in Prague). She has already been to Denmark, Sweden, Holland, and Germany and has plans to visit Croatia, Hungary and Austria.

Raya tells me that liked Copenhagen a lot because everyone was so friendly and spoke good English. Plus, the ketchup in Denmark was free. We laugh about the ridiculousness of paying 5 CZK extra for ketchup sauce in the Czech Republic – I mean, really, why can’t the price just be included in the meal. I tell Raya about the time my father was charged 140 CZK when he ordered butter in a hotel restaurant.

Raya wants to know about Czech culture and how to fit in living here as a foreigner. “Is there anything we should or shouldn’t do, you know, to make ourselves not stand out?” Raya asks. She tells me how when she and her friends go out in Prague in a group, people stare. She doesn’t like the feeling, but she’s not sure what to do about it. She has learned to give up her seat in the tram or metro for older Czechs and not to speak English loudly when riding public transport. What else should she do to blend, she asks.

For a moment, I am transported back to my early days when Prague was a mystery of unrecognisable sounds and traffic patterns – a 1000-piece jigsaw puzzle with green, yellow, and red metro lines and trams routes numbered 9, 16 or 22. When daily life meant sorting out a leaky roof with hand gestures, doing laundry by lugging a duffle bag to the Prague 2 laundry mat, and grocery shopping with a dictionary.

Besides Starbucks, telephones with GPS and international calling plans, I wonder how much has changed in the 16-plus years since I first arrived in the Czech Republic.

Suddenly, I desperately want to see Prague through the eyes of a twenty-year-old traveler.

In a flash, I remember how awful it felt to be so conspicuous, to have my language and my body motions give me away as an interloper. I also remember wondering if I had done something to deserve the cold stares of passersby, as if just by breathing the same Prague air I was guilty of some unknown (at least to me) crime.

I tell Raya that the gruffness of Czech society, particularly in spaces like the metro, the doctor’s office, and supermarkets, is a topic that my kids and I talk about all the time. Even though they are Czech and have spent their entire lives living in the Czech Republic, they still come to me shaken up that someone wasn’t smiling or seemed annoyed.

I tell Raya the same thing I tell my kids, “People might seem annoyed. Who cares? Just keep smiling.” It is questionable advice, but ever since I read in Runner’s World that runners who smile actually run more efficiently, I have carried the theory over to my life in the Czech Republic. Every time someone smiles back, I take it as a personal victory. My husband laughs that people go around talking about the crazy, grey-haired runner who speaks Czech with a funny accent and smiles at everyone. But, I believe it helps.

“Is the wi-fi safe here?” Raya asks. I assume she means in Starbucks. But she means in the Czech Republic. I assure her that it is. “I use it all the time,” I smile with what I hope is an encouraging smile. We talk about the park near her student housing and being safe walking through the city. Raya is surprised when I tell her that Anna gets around Prague on her own and even goes to the movies with her friends.

Before I head out to pick up my boys from baseball practice, I ask Raya if there is anything else I can help her with. Even though I feel like her experience mirrors my own when I first arrived in Prague, I am aware that I am twenty-years older than she is, and I likely have no clue what she needs to hear.

Raya says, “Can you tell me the words for ‘sugar’ and ‘salt’ in Czech?’ When I go shopping, I can’t figure out which is which.”

Yes. This is something I can do. I take out a clean piece of paper from my notebook and make two columns – one for English and the second for Czech. Raya recites the words she needs – turkey and ham cold cuts, butter, margarine, flour, salt, sugar – and I write the Czech equivalents.

We talk about ordering food and drinks in restaurants and why she can use the words “WC” or “toalety” when she’s looking for the bathroom, even if they sound kind of rude to her ears. We practice the pronunciation for the Czech phrases “prosim” (please) and “dekuji” (thank you) and how to ask for the bill “zaplatim” (I will pay).

We finish the list, and Raya thanks me. We agree to keep in touch.

I know that in a few weeks, Raya will have figured out on her own most of what I told her. By the time her parents arrive in late October, she’ll be leading them around the city as if she’s lived here for years. She will not need a 40-something mother of three to give her advice.

After Raya walks away, I think about Fadiman’s quote, which I found in Harper’s Book of Quotations under “Travel.” Why does traveling so often bring discomfort? What kind of responsibility does a visitor to a foreign country owe the country’s inhabitants? How does one cross the line between belonging to a place and simply existing there? I wish I knew.

Beyond dispensing a few survival pointers, talking with Raya about her first impressions of Prague has given me a chance to revisit my younger self. How much have I changed in the 16 years since I first arrived? How much of me is still the same?

Born in the USA in 1904, the son of Russian immigrants, Clifton Fadiman vowed as a child not to have the same difficulties with the English language that plagued his parents. He taught himself to read when he was 4 and was reading Homer, Sophocles and Milton by the time he was 10 years old. He embraced knowledge, Western culture, and the pursuit of wisdom, learning multiple languages and reading over 25,000 books in his lifetime.

In addition to writing for Encyclopaedia Britannica, Fadiman hosted the radio show, Information, Please! which had 9 million listeners during the 1940s. Later, Fadiman served on the editorial Board of the “Book of the Month Club.” Yet, he saw himself more as a guide to the wisdom of others than as a wise man, although his peers thought differently. His most well-known quote was, “When you reread a classic you do not see more in the book than you did before; you see more in you than there was before.”

On this early September day, I am grateful to Raya (and Fadiman) for reminding me that beginnings, particularly those which take us to new places, aren’t always easy. Being exposed to different cultures and stepping out of our comfort zones can be an exhilarating, yet daunting, experience.

While there are many aspects of Czech life that I have adapted to, it is true that I can still get undone by a cross word or an abrupt exchange. But, being aware of my feelings helps me (most days) to smile and not take it personally.

And I have learned, sometimes, you have to pay for ketchup. 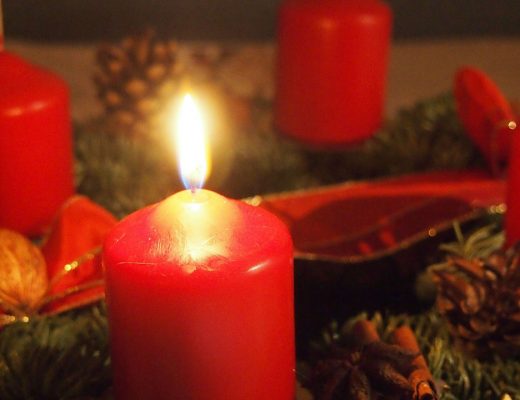 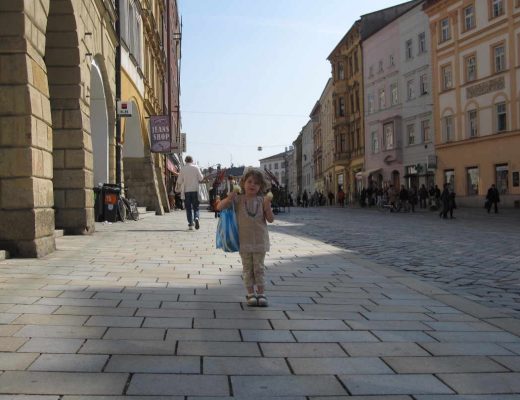 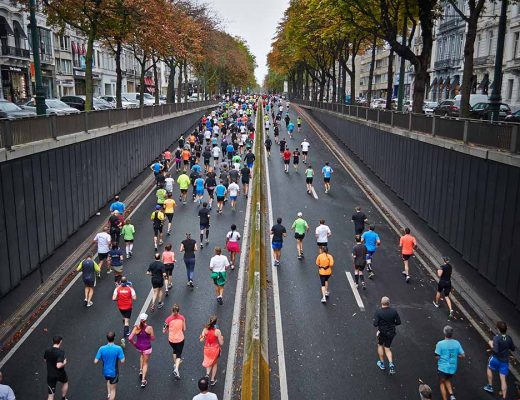 Happy New Year from the Pruchas! Health, peace and

Nearly 15 years after our last visit to NYC, we ca